An ATEX version of the wireless Handheld Plus followed, while other wireless products including compression cells, shackle cells, load pins and the Running Line Dynamometer (or TIMH), part of the manufacturer’s tension in motion range, are also in accordance with the new 2014/34/EU directive and boast classification in the three zone, including 0 (an area in which an explosive gas atmosphere is present continuously or for long periods)—unprecedented in wireless below-the-hook force measurement technology.

The criteria of ATEX and IECEx are broadly similar, although the former is widely accepted throughout Europe, while the latter is required in many other global markets.

The ATEX version of the load cell and wireless handheld unit contains several safety components that permit its use in Zone 0 environments. A separate storage area has been created at Straightpoint’s Havant, UK headquarters and all production personnel have been specially trained in the assembly of the explosion proof units.

Mining, On and offshore oil and gas, chemical and other industries with challenging hazardous areas. 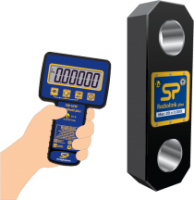 BETTER SOLUTIONS, BEST SERVICE. GET IN TOUCH WITH SCHILLINGS HOISTING EQUIPMENT             Contact Us